It was very early Sunday morning and our plan was to visit the Grand Palace, fully ready to face the weekend crowds. But just before leaving, we both felt a little tired and not energized as we would like to be, and we made a last-minute decision to head to Wat Prayoon Wongsawat (also known as Wat Prayun or Wat Prayurawongsawat) instead. When we arrived, the stunning pure white Chedi was just beyond what we expected. And it was so tranquil and beautiful there we didn’t regret the decision at all!  We got back and immediately came up with this complete guide to Wat Prayoon and why we visited the Wat less traveled and loved it! 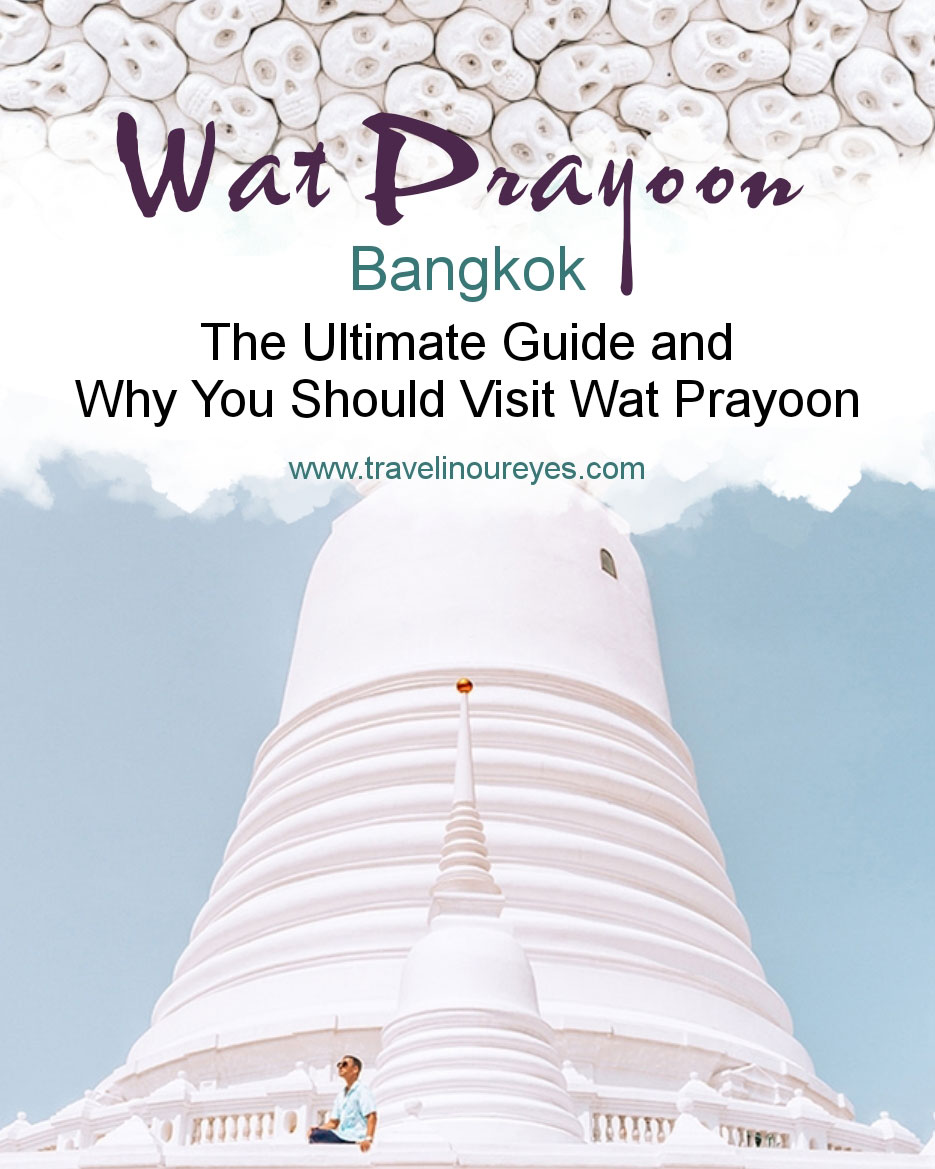 Here’s a quick roundup of why you should visit Wat Prayoon, with details below:

Wat Prayoon is on the Thonburi side of the river, just at the foot of Memorial Bridge.

Taxi/Grab drivers all know the area and can take you there.

A fun way to get there is to take the river taxi to Saphan Phut Pier and walk across the memorial bridge. You’ll see the red iron fence of Wat Prayoon at the foot of the bridge and of course the stunning white Chedi.

For more information on navigating through the city, check our Bangkok Travel Guide For First-Timers.

There is no entrance fee to Wat Prayoon. Yay!

As with all temples and sacred places in Thailand (and throughout Asia), dress respectfully and modestly.

That’s just simply for both sexes to cover their knees and shoulders. Tank tops, shorts above the knees are not appropriate to wear. Wearing a shawl to cover bare shoulders or a sarong to cover the knees is acceptable. 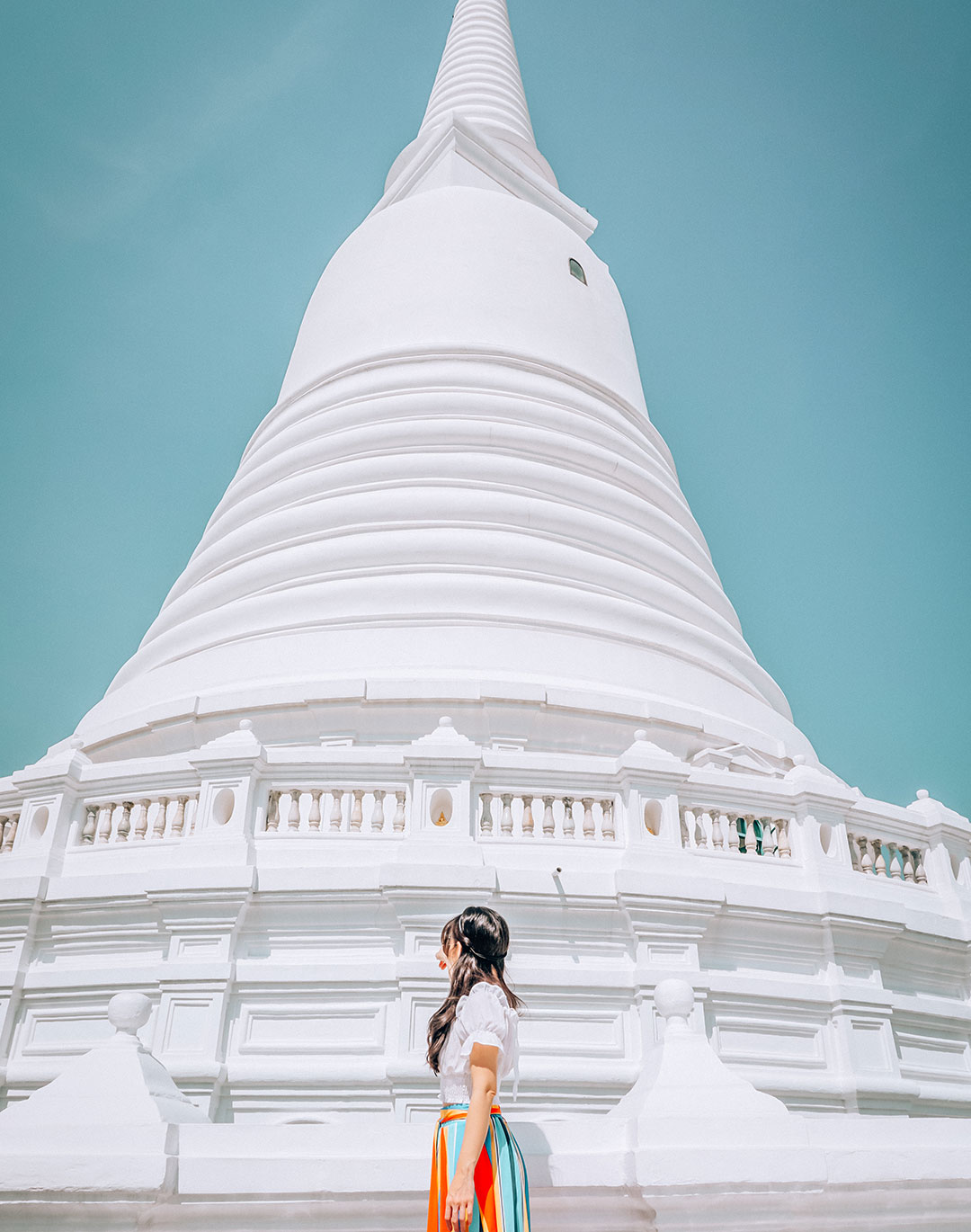 OUR SECRET TIP: There are no scarf or sarong rentals available here and no vendors outside to buy it from. Come prepared and appropriately dressed or bring a scarf/sarong.

Wat Prayoon and the chedi 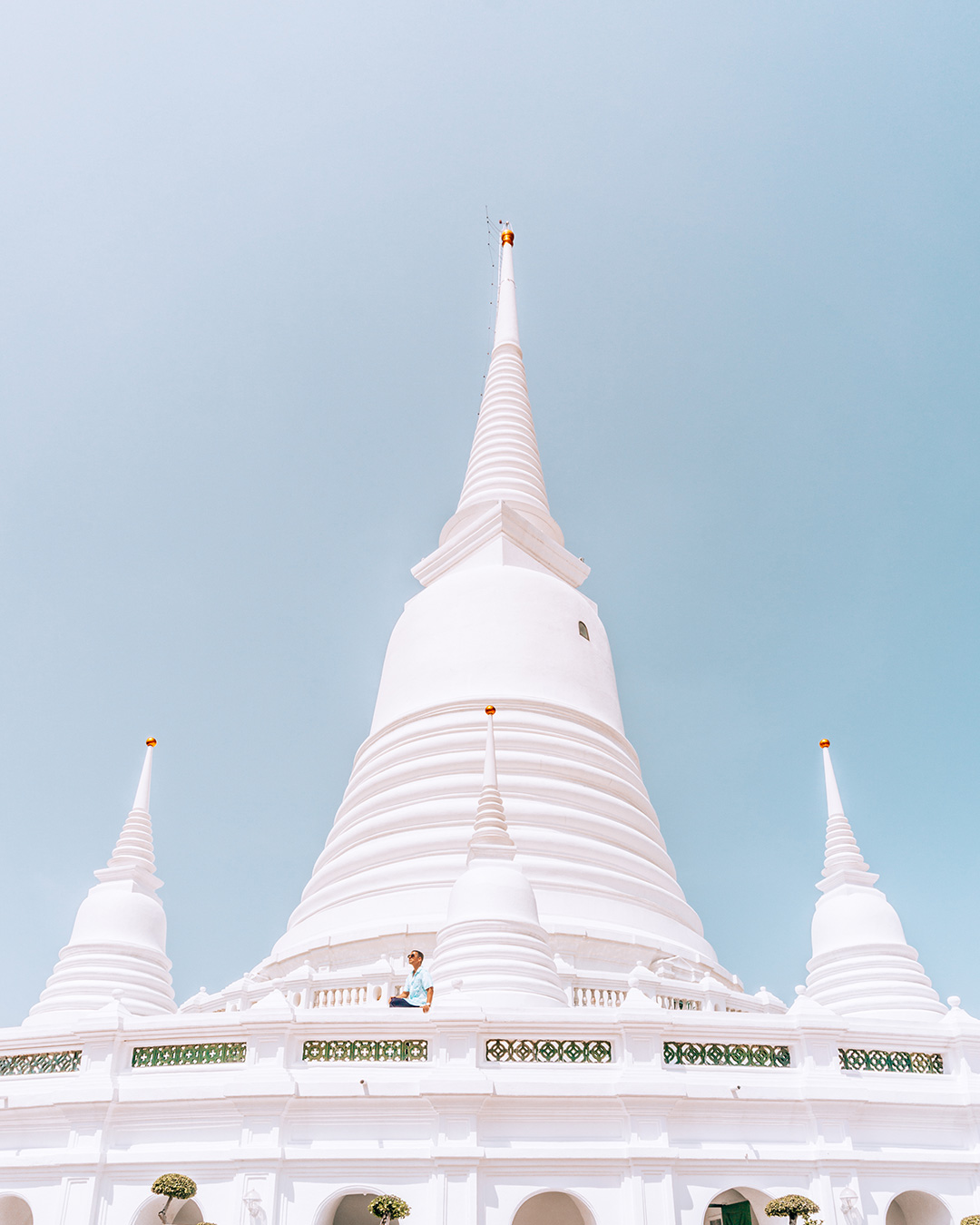 Wat Prayoon Wongsawat was built during King Rama III reigned over Siam from 1824–51. Fun fact – King Rama III was the elder brother of the famed “The King and I” King Mongkut who ruled after him.

The most striking feature of this temple is the chedi in dazzling white and which can be seen from the Chao Phraya river. The Chedi, the Phra Borommathat Chedi, is about 60 meters high and 50 m in diameter at the base. There are 18 smaller chedis around the base. Built in the Ayutthaya style, this Chedi is apparently the only large chedi of its type that was completed within the city of Bangkok. The story is that King Rama II attempted to build a similar one at the eastern gate of the city, but the chedi collapsed and later become the Golden Mount.

A 1.5m rust-red iron fence fashioned from ancient weapons, including lances, swords and axes circles the temple. This fence once was a prominent feature inside the temple, but has since been removed and is now only up at the entrance.

Wat Prayoon was nominated for a UNESCO award back in 2013. 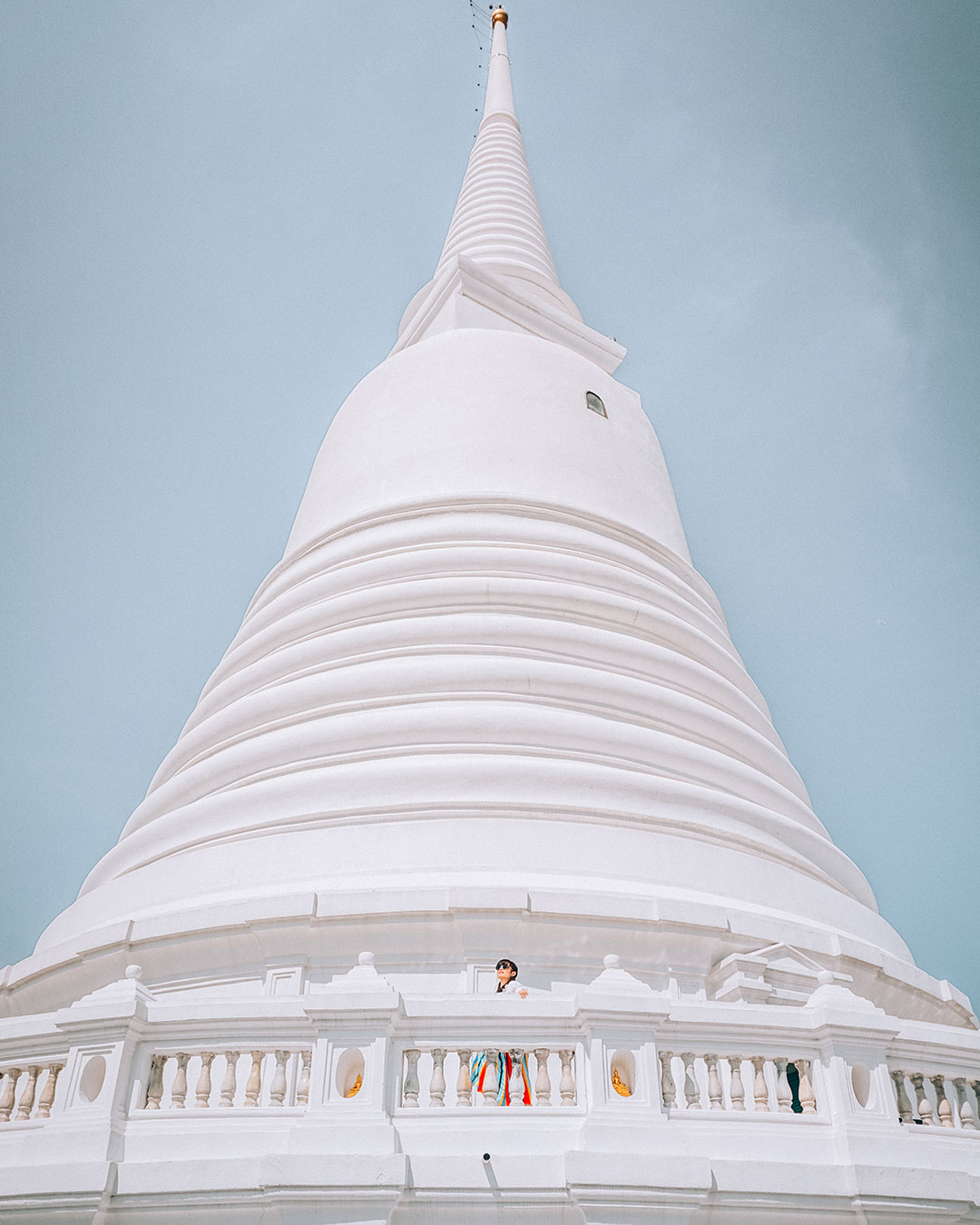 OUR SECRET TIP: Go check out the Wat and Chedi first before heading to the Turtle Moutain. You can climb up to all levels of the Chedi and see the inside as well.

The locals describe the temple’s outstanding features include the Phra Borommathat Chedi, turtle ‘mountain’ housing spirit houses and the pond with.  They are indeed very beautiful, but what really stunned us were the skulls and was almost reason enough for why you should visit Wat Prayoon.

Artist Nino Sarabutra’s installation project ‘What Will We Leave Behind’ showed in Wat Prayoon. 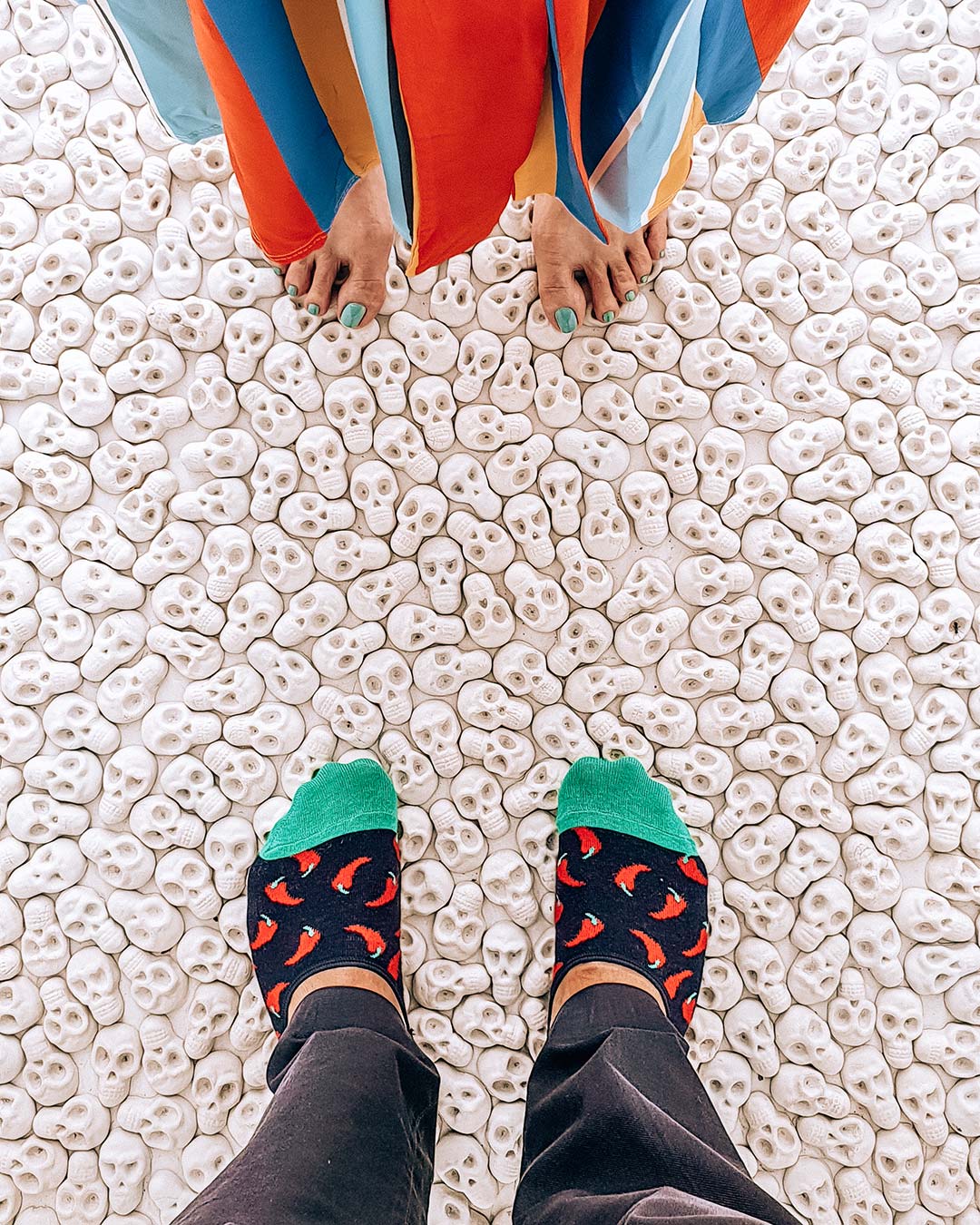 Sarabutra’s project has 125,000 porcelain skulls arrayed on the ground, forming a circulatory path around the gateway to the main stupa of the temple. The project aims to have visitors reflecting on life and death while walking barefoot on the fragile ceramic miniature skulls.

Though the installation, ‘What Will We Leave Behind?’ has been there since 2012, the impact of the work is still there. This was an amazing thoughtful integration and connection of spirituality, cultural heritage and contemporary art rarely seen anywhere in the world in a place of worship. 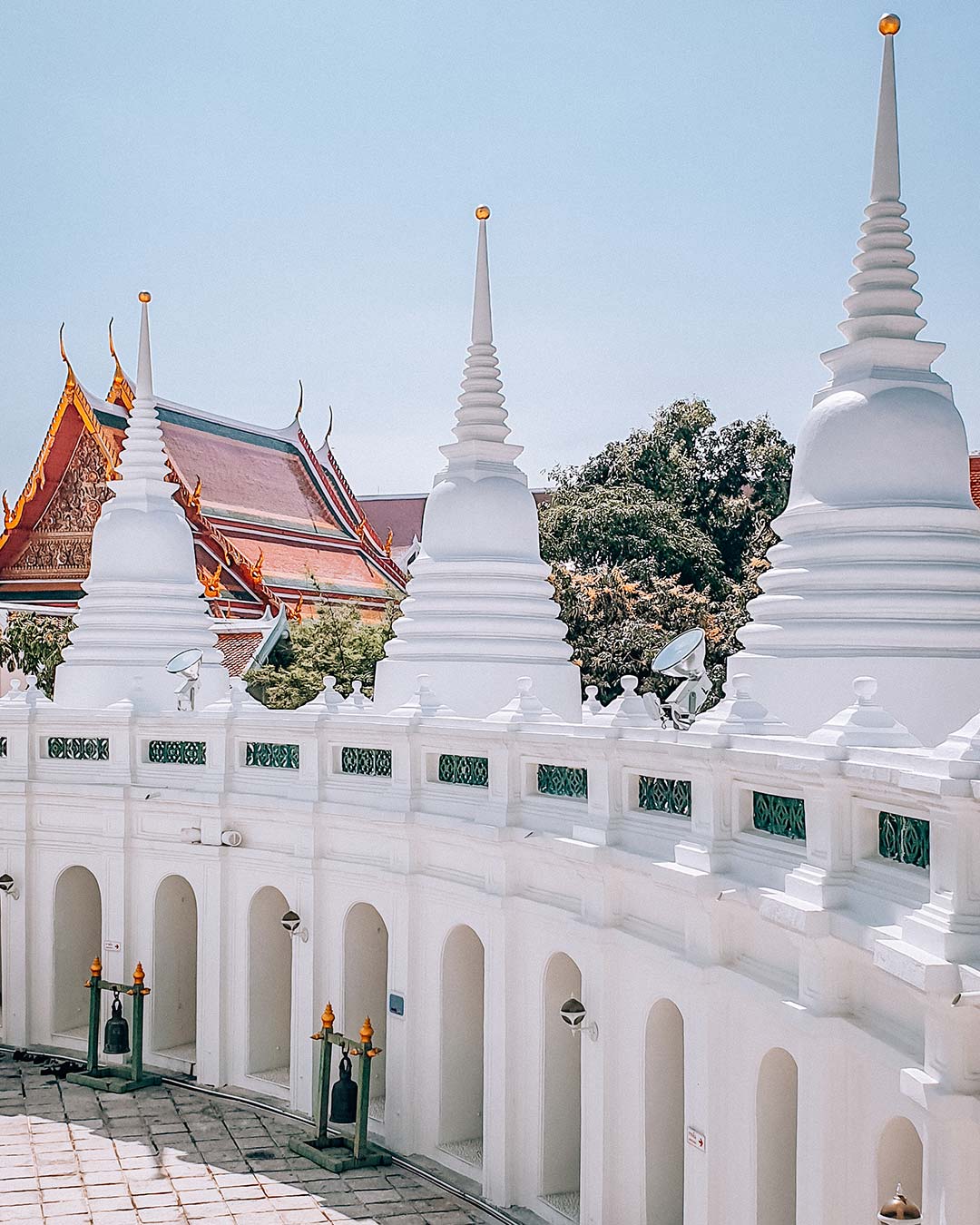 After visiting the temple, you can walk around the grounds to Turtle ‘Mountain’.

Legend has it that the king designed Turtle ‘Mountain’ after he observed shapes that melted candle wax forms. Elaborate miniature houses and shrines dedicated to the deceased covers the mount. These spirit houses and shrines are in different architectural styles (including a doll house) as well as a small grotto. We didn’t take any photos here out of respect, but it is fascinating to see for yourself.

Surrounding the mount is a quiet pond with turtles and for a small fee, you can even feed the turtles.

We hope intrigues you enough to put Wat Prayoon on your Bangkok Bucket List.

WHERE TO STAY IN BANGKOK

SHANGRI-LA BANGKOK: A luxurious haven right on the banks of the Chao Phraya River with some of the most amazing sunset views. Perfect base for those who want to explore the Grand Palace and the city’s amazing Wats by the river. Check the latest prices and book the Shangri-La Bangkok here.

IN THE HEART OF THE CITY

SO/ SOFITEL BANGKOK: A visually stunning luxurious urban hotel designed by Thailand’s top five designers and Christian Lacroix. The hotel is uniquely designed, it’s as if it’s a modern art gallery. Perfect for all art and design enthusiasts who want to explore every part of the city. Check the latest prices and book the SO/ SOFITEL BANGKOK here.

VOLVE HOTEL BANGKOK: A warm, chic designer hotel located in the hip district of Thonglor. Perfect for travelers who want to explore a less touristy side of Bangkok. And to food lovers, Thonglor is known to have some of the best restaurants, cafes and bars in Bangkok! Check the latest prices and book the VOLVE HOTEL BANGKOK here.

20 THINGS WE WISH WE KNEW BEFORE TRAVELING TO BANGKOK 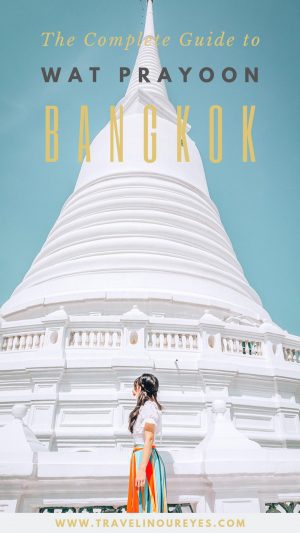 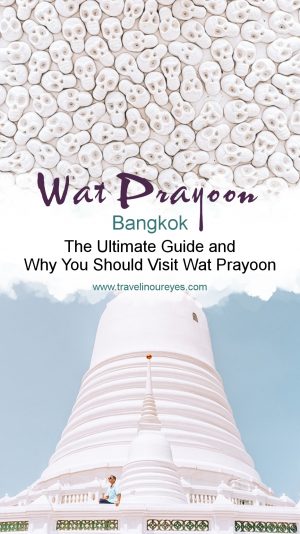